After a good night sleep, we had some cereal and biscuit for breakfast. Then its time to shower and get ready to explore this little town called Fremantle.

Early morning, little Justin already start his mischievous engine. He wanted to hide there at the corner with his mickey mouse.. doesn't want to come out

Finally, both showered and getting ready to go out. Say cheese to the camera :) Jaclyn wanted to wear her hello kitty skirt, so added more layers for her, scared weather too cold for her.

We strolled to the Fremantle Market which only opens from Friday to Sunday. Its Sunday today so we were lucky... 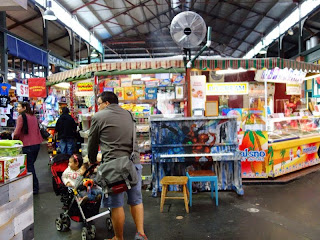 I find that the fruits vegetable side is more appealing, fruits are fresh and at reasonable prices, we bought persimmon and cherry. We were a little  hungry and we saw this lady eating a bowl of paella, it looks so yummy so we bought 2 shares. Its nice and warm, good to eat in this weather but taste wise, its normal.. nothing fantastic. And it cost $7 per bowl which is quite pricey cause its quite a small portion.


Today is also the Sunflower's Dash by The Leukaemia Foundation, so we joined in the fun. Plenty of people running around, with a sunflower pin on them... that is quite a sight!

Saw a museum on our way to the Roundhouse, can't remember the name of the museum. We didn't visit the museum but we did make good use of the plot of grass in front of the museum for the kids to unwind the muscle....

Roundhouse is one of the historical building in Fremantle, its worth a visit but don't expect much. Its basically a roundhouse and one area with a canon and some flags, thats all.

Actually, although its called a roundhouse, its actually not round, its more of an optical illusion as the building is made up of 12 walls....

There is no admission fees to the roundhouse although donations are encouraged.

Time to rest our legs and have some hot food. Choose Vietnamese food cause has been eating western yesterday, so wanted to kids to have some rice. We checked on TripAdvisor and iPho has quite a good review so decided to give it a try.

We had Com Tan, which is vietnamese rice (its a smaller grain compared to usual rice), it comes with a grilled pork, salad, soup, vermicelli omelet etc. This was a great dish... especially love the grilled pork, very yummy!


Qin wanted noodle, so ordered a chicken glass noodle. The soup base is flavourful and noodle is also nice. Thumbs up!


After lunch, we drove around the town and went to The Reject Shop and Woolsworth for some shopping. Bought some food stuff, muffin tray, kid's toothbrush, shampoo, body wash etc.. Jaclyn also bought a Barbie doll, its her FIRST barbie doll. Now having promotion at Woolsworth at $9 and its a steal, so bought one for her :) She is very excited and happy with her new barbie.. keep hugging it.

Time for nap for the kids.... After napping, its dinner time. Its all dark outside again.... Decided to go for chinese for dinner, saw Joy Kitchen while we explore the surroundings this morning so went there to try...

Its a nice cosy place, elegantly decorated with white table cloth. The service is also good and attentive. This is the first restaurant who placed paper beneath kids' high chair... i think this initiative is good, although it doesn't look nice but very very practical...So, doesn't need to worry that kids made a mess during meal cause they got it all covered. Haha!

Stir fry brocollini and snow peas with chopped almond. Nice and refreshing vegetable with a crunch. thumbs up!


After a satisfying meal, went back hotel to have some cherry that we bought in the morning. Jaclyn loves them, Justin just playing and didn't eat much!